Your Guide to Shopping in London

Like all the world's greatest capitals, shopping in London is something special. The city contains some of the biggest national branches of the brands we love, iconic department stores and more quirky shops, too.

Camden Market is one of the most eclectic and vibrant areas in London. It’s stacked to the rafters with cool shops, must-visit live music venues, brilliant pubs, and more. 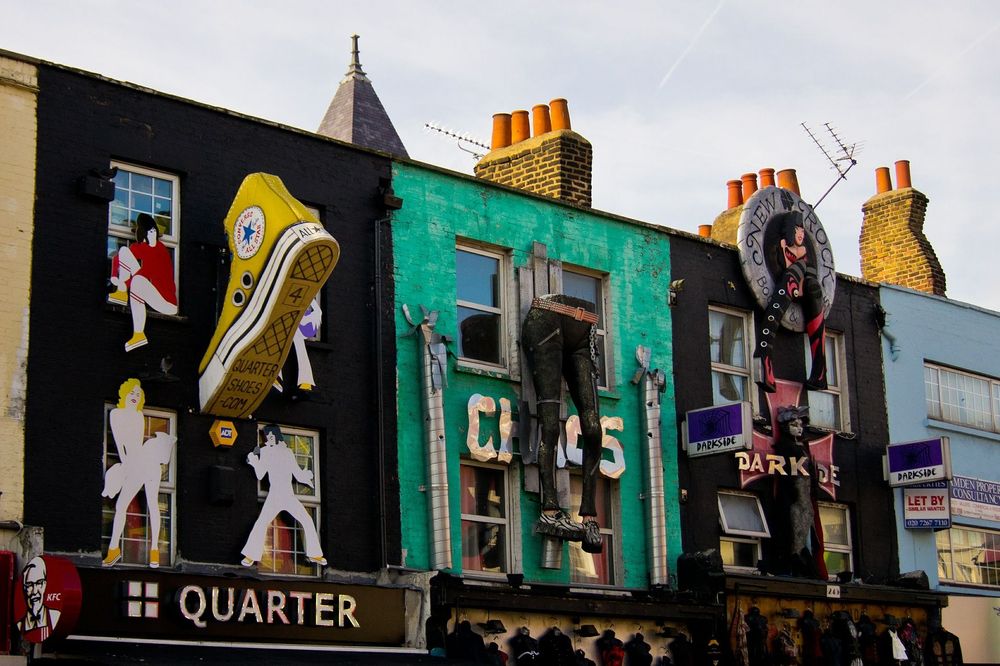 The Camden markets are in fact several different markets rolled into one. Collectively, these are called Camden Market or Camden Lock. Located on the banks of the Regents Canal, the area is a treasure-trove; a veritable warren of alleyways lined with alternative shops and great eateries to explore.

The area is home to many markets, including Camden Lock Market, the Stables Market, Camden Lock Village, Inverness Street Market, and the market inside Electric Ballroom. You’ll find everything from vintage clothing to souvenirs and novelties here, so there’s plenty to see!

Head north and discover the alternative spirit of this iconic enclave for yourself. But before you go, check out our guide below to discover everything you ever wanted to know about Camden Market and the surrounding area.

The History of Camden Market

To help you plan your trip to London’s most diverse market, we’ve narrowed down some interesting facts about Camden Market alongside a bit about the area’s history.

A quickfire round of useful facts about Camden Market:

Find out everything you need to know about visiting Camden Market.

Originally, the markets were only open on Sundays, and it’s still the biggest day of trading. However, most of the market is also open on Saturdays now, and many of the traders are open every day of the week on top of this. Camden Market is open from 10am to 6pm every day.

How to get to Camden Market

Camden Market is centrally located, and sits at a big junction for north London. As such, it’s really easy to get to – however you like to travel.

Underground: Chalk Farm and Camden Town underground stations are closest to Camden Market; both are a short walk away. Camden Road station is serviced by the London Overground line, and is less than 10 minutes’ walk away from the markets.

Train: The nearest mainline stations to Camden Market are Kentish Town railway station and Euston. It’s also not far from the Eurostar service at St Pancras.

What to do in Camden Market

Whether you’re looking to get lost in Camden’s quirky stalls or take a stroll by the canal, a visit to Camden is a great way to spend the day.

Camden is the ultimate hub for the weird and wonderful, taking shopping to a whole new level.

For all things vintage, the Stables Market is your go-to. The market has over 1,000 shops and stalls like The Vintage Collection full of vintage clothing and accessories.

The Stables Market is also home to the Dr Martens flagship store. The store features artwork commissioned by the bassist from the Specials, and a VR station that takes guests on a tour of the iconic brand’s original UK factory.

Cyberdog encompasses everything there is to love about a shopping trip in Camden. The store is an explosion of neon colours, set in a futuristic rave-like atmosphere that has become somewhat of a popular tourist attraction on its own accord.

There are plenty of events that take place throughout the year in Camden Market. Head to Solomon’s Yard during the summer for great weekenders, pop-up shops and eateries, and DJ sets from household names.

And don’t miss the annual Camden Rocks festival in June, to see live music performances from some of the best new and established bands in the UK.

Camden Market also hosts summer parties, festivals, and vintage fairs; there are special movie screenings and comedy shows, exhibitions, gourmet masterclasses and theatrical events to enjoy, too. To find out what’s on, take a look at the Camden Market website.

Where to Eat and Drink in Camden

Camden offers diversity when it comes to food and drinks. From freshly-baked goods to street food that’s made to tingle your tastebuds, the markets and local restaurants will not disappoint.

There are lots of cool places to eat in the markets themselves, and plenty of dining options in the immediate area, too. Try Honest Burgers at 34a Camden Lock Place for really good British produce, or Maize Blaze for exotic Colombian street food. Purezza Camden at 43 Parkway serves fab vegan pizzas. For authentic Middle Eastern food, try Zala Grill.

Camden is awash with great pubs that are loved by locals and tourists alike. Lockside Camden on Upper Walkway, The Hawley Arms at 2 Castlehaven Road and The World’s End at 174 Camden High Street are all really good.

With plenty to see and do in Camden Market, there’s no better way to spend some time in one of London’s most popular areas. Book a stay at our hotel in London City Shoreditch which is a short tube ride away from Camden Town Station.