Travel Guides>Europe>Where to Find the Best Views in Barcelona

Where to Find the Best Views in Barcelona

If you want to enjoy far-reaching views of Barcelona, the Catalan capital is home to some great vantage points that overlook the city. From national monuments to rooftop terraces, head to these hotspots to find the best views in Barcelona. 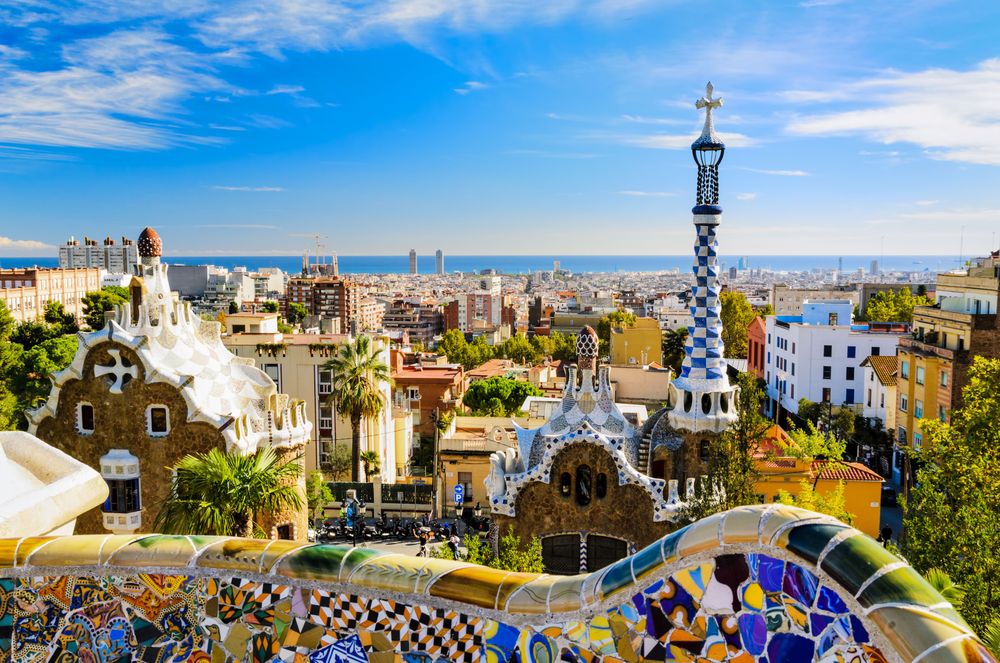 Where to Find the Best Views in Barcelona

For the perfect mix of Mediterranean sun, beaches, food and grand architecture, this iconic Spanish city is not to be missed.

Parc Güell is one of the most popular attractions in Barcelona. Located on Carmel Hill, this public park covers 17 hectares and is well worth a visit – especially if you’re after some stand-out views of the city.

Parc Güell was originally designed to be part of a luxury housing estate. The brainchild of Spanish entrepreneur Eusebi Güell, the idea was for Parc Güell to become a ‘garden city,’ and he called on the famous architect Antoni Gaudí to design it. Work began on the estate in 1900, and Gaudí himself moved to live there with his father and niece in 1906.

However, the project failed to fully materialize and was abandoned in 1914 – with only 2 of the 60 proposed houses built. Instead, it became a large private garden which Güell used for public events. When he died in 1922, it was bought by the council, and first opened as a public park in 1926. Parc Güell was declared a UNESCO Heritage Site in 1984.

When visiting, take advantage of the park’s many vantage points. At the top of the park, you will find a terrace called ‘The Greek Theatre’ or ‘Nature Square.’ From here, you can take in great views of the park and the city. On the terrace, you’ll also find seating adorned with colourful mosaic tiles.

Getting to Parc Güell

Bus Güell operates from the nearby Alfons X metro station (L4), and it takes 15 minutes to get to Parc Güell from here. This is included in your Parc Güell entrance ticket.

The H6 bus line and the D40 line will take you within 10 minutes’ walking distance of the park; Travessera de Dalt.

You can also get to Parc Güell by jumping on the metro. Head to Lesseps station or Vallcarca station (L3); both are 20 minutes away from Park Güell on foot.

Head up to this old military fortress, and take in the views over Barcelona and out to sea.

Standing 173 metres above the port of Barcelona, Montjuïc Castle provides unbeatable 360-degree views of the city. Built in 1640 in the Reapers’ War, it was a key defence point in the War of the Spanish Succession between 1705 and 1714. During the 18th century, it was restored following war damage, and has appeared the same way ever since. In 1940, the president of the Catalan government, Lluís Companys, was executed here. The fortress was used as a military prison until 1960, when it was given back to the city as an army base. In 2007, the castle came under the ownership of Barcelona City Council, and it now belongs to all the citizens of Barcelona.

How to get to Castell de Montjuïc?

By bus: line 150 stops at the castle. The bus ride takes 20 minutes from Plaça Espanya.

By cable car: The cable car starts at Avinguda Miramar and leaves visitors right in front of the castle.

Just past the park, sitting at the summit, you’ll see the Temple of the Sacred Heart of Jesus; you can spot this historic Roman Catholic Church from almost anywhere in the city.

The easiest way to get to Tibidabo is by hopping on the funicular: an aerial tramway connecting the surrounding area to the summit. To reach the lower station of the funicular, you can walk, catch the vintage tram Tramvia Blau, or catch the 196 bus. The funicular will take you directly to the amusement park.

Another Gaudí masterpiece, La Sagrada Familia is one of Barcelona’s most iconic buildings. Though unfinished, this Roman Catholic basilica is nothing short of extraordinary. In fact, it’s one of the city’s most-visited attractions. Gaudí was so devoted to building the Sagrada Familia, he lived next to his workshop during his final months. He envisioned the building with 18 spires but, when he died in 1926, only one tower had been completed.

Today, 8 of the 18 spires are completed. Once the work has finished, the main tower will measure 170 metres. You can go up the existing spires, but access isn’t included in your general admission ticket, so you’ll need to buy this separately. For views of the sea and the east of Barcelona, go up the spire on the Nativity Façade; the Passion facade faces the city centre, so you’ll get to enjoy far-reaching views of the city from here.

Getting to La Sagrada Familia

Enjoy panoramic views of the city from these old Spanish Civil War bunkers. The bunkers are located at the top of Turó de la Rovira: a hill overlooking the city with an altitude of 262 meters. From here, you can see some of Barcelona’s most notable landmarks and the coastline beyond. It’s becoming an increasingly popular spot, and is considered one of the best natural viewpoints in Barcelona.

Getting to Bunkers del Carmel

Inevitably, there’s a bit of uphill walking involved with getting to Bunkers del Carmel, though public transport can take you some of the way.

The 92 and the 119 busses will take you very close to the bunkers in Barcelona. Alternatively, you can take the metro. The closest metro stop is El Carmel (L5), but you can also reach the Bunkers by walking through Parc del Guinardó, getting off at Guinardó | Hospital de Sant Pau station (L4).

For 360-views of the city, head to The National Museum of Art of Catalonia (MNAC); a historic building dating back to 1929. There are currently two terraces located on the roof of the National Palace building where access is free for those with museum tickets. It currently costs €2 to go to the top without a museum ticket which can be purchased at the MNAC front desk. You can reach the Palau Nacional by metro (nearest station is Plaçad’Espanya – L1 & L3); bus route 55 takes you closest (stop Museu Nacional d’Art de Catalunya/Museu Etnològic).

Barcelona has no shortage of offering visitors different ways of enjoying incredible views of the city. Another fantastic way to make the most of those panoramic views is to hop on a cable car.

Discover Barcelona in the air with a ride on the Telefèric de Montjuïc. This gondola lift is 752m in length and runs from Parc de Montjuïc to Castell de Montjuïc without making any stops; on the return route, it stops at Mirador l’Alcalde – another great viewpoint in Barcelona. The closest metro station is Poble Sec (L3), which is about 15 minutes away on foot.

The Telefèric del Port is a port cable car, strung across the harbour between La Barceloneta and Montjuïc offering amazing views of the city and port. The journey lasts approximately 7-minutes and costs €16.50 for a return journey. To reach the cable cars, the closest metro station is Barceloneta (L4). From here, it takes around 15 minutes to reach the cable car on foot.

Las Arenas de Barcelona is a shopping centre located in Plaça España. The rooftop offers far-reaching views of the city. There are also many bars and restaurants located on the rooftop, so visitors can sit back with a drink or a meal while they take in stunning views.

Getting to Las Arenas de Barcelona

With countless viewpoints available to enjoy the stunning city of Barcelona, you are truly spoilt for choice. For easy to reach transport links, book a stay at easyHotel Barcelona Fira.

From €90.66 / night
subscribe to our newsletter
Romantic City Break Ideas for Couples

Things to do Near Charles De Gaulle Airport

France's largest international airport is a gateway to the capital. But if you're planning a trip to Paris, you'll also find there's plenty to see and do close by! Find out what to do near Charles de Gaulle airport with our handy guide.

Discover the must-see movie locations from your favourite films set in Paris with our guide.

Top Music festivals In Belgium and The Netherlands